Egypt booked their place in the semi-finals of the TotalEnergies Africa Cup of Nations, Cameroon 2021 with a hard fought 2-1 victory over Morocco at the Stade Ahmadou Ahidjo.

Captain Mohamed Salah and substitute Mahmoud Hassan Trezeguet scored for the Pharaohs who went behind after Boufal converted an early penalty for the Atlas Lions.

The derby lived up to its billing as Morocco won a penalty in the second minutes following a late on Hakimi by Egypt’s Ayman Ashraf.

Soufiane Boufal made no mistake from 12 yards when he calmly slotted past stand in keeper Mohamed Kotb Gabal.

Despite going behind the Pharaohs settled into the match and came close to levelling the score after 19 minutes when Ashraf hit a fierce strike straight at Bounou.
Mohamed Elneny of Egypt challenged by Aymane Barkok of Morocco during the 2021 Africa Cup of Nations Afcon Finals Quarterfinal match between Egypt and Morocco

The Atlas Lions keeper was again called to action to deny Marmoush as Egypt enjoy a good spell of dominance.

The second half saw a much more ambitious Egyptian side with the introduction of Trezequet helping the Pharaohs with more presence in the Moroccan box.

Salah equalised for Egypt with a close range tap in after Bounou had stopped Abdelmoneim’s diving header 12 minutes after the restart.
Rayan Mmaee of Morocco challenged by Mohamed Elneny of Egypt during the 2021 Africa Cup of Nations Afcon Finals Quarterfinal match between Egypt and Morocco

The Atlas Lions saw defender Nayef Aguerd’s header turned against the woodwork by Gabal who filled in for the injured El Shenawy.

The two giants headed to extra time to settle the quarter final with Trezequet scoring the winner with a tap in from Salah’s cross.

The Pharaohs will now play hosts Cameroon in the semi-finals in Yaounde.
Mahmoud Trezeguet Hassan of Egypt celebrates goal with Mohamed Salah during the 2021 Africa Cup of Nations Afcon Finals quarterfinal football match between Egypt and Morocco

“I think we played a good game against a very good Moroccan team. My teammates do what is necessary in each game and give everything to go as far as possible. Playing two games in a row with extra-time is not easy, but I can tell you that we are well and we are having a very good tournament”

“Both teams deserved to qualify for the semi-finals with great players on both sides. I am satisfied with the performance of my players. We have a good group with players who fight together in all compartments. Mohamed Salah had a good match today but for me we have to congratulate the whole team. We have several injured players, but all the players gave their best to win this match”. 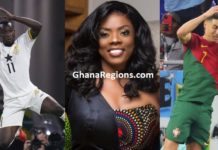 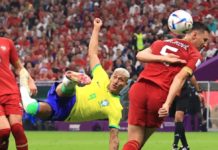