Nana Aba Anamoah, the General Manager of GhOne TV, has given Ghanaian forward Osman Bukari a great reason not to feel bad for the Cristiano Ronaldo trademark celebration he did against the Portuguese side yesterday evening.

Osman Bukari, the striker, scored a header in the 89th minute to help the Black Stars reduce Ghana’s deficit to one when they were losing by three goals to one.

Osman Bukari, however, made headlines when he continued to celebrate his late goal with the well-known Ronaldo’s Siuu celebration, which many perceived as showing a great deal of disrespect to the football icon.

After the game, Osman Bukari apologized to Cristiano Ronaldo on his official Twitter page because many people felt that his celebration was totally disrespectful of him.

However, Nana Aba Anamoah believes that the young player had every right to celebrate because he scored a significant goal on a significant stage.

Nana Aba Anamoah said:
You scored a beautiful goal on a big stage against a big team. You had every right to celebrate. Shine on 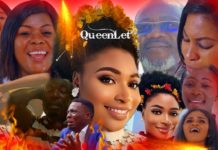